Describe what happens when an object is created in Java?

Several things happen in a particular order to ensure the object is constructed exactly:

Button bt1= “abc”; It is because “abc” is a literal string (something slightly different than a String object, by-the-way) and bt1 is a Button object. That simple. The only object in Java that can be assigned a literal String is java.lang.String.

Important to not that you are NOT calling a java.lang.String constuctor when you type String s = “abc”; 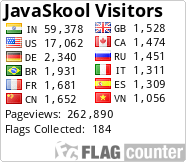